Across the country, inflation is up and families are hurting. They’re not just seeing big increases at the pump, but across most sectors of the American economy. Staples like chicken, fruit, and vegetables are quickly increasing in price, and the cost of dairy and related products is rising at the fastest rate we’ve seen in nearly eleven years.

But according to Speaker Pelosi and House Democrats, they have a lot to brag about.

In today’s press conference, Leader McCarthy took President Biden and House Democrats to task for their continued inaction on the issues that are hurting America’s working families the most: high prices at the pump, high prices at the grocery store, and record encounters at our southern border.

Remarks as prepared are below, or you may watch online here.

“Yesterday, Speaker Pelosi said that Democrats ‘have done a great job. We must take great pride in what we’ve done. We’ve got a lot to brag about.’

“How remarkably out of touch.

“A recent poll showed the American consumer sentiment has sunk for the fifth time in the past six months – a near-11 year low.

“And for good reason.

“Whether at the pump, the supermarket, or virtually everywhere else Americans are spending money, they are paying the highest prices in living memory.

“And inflation – which is a tax on every American – shows no signs of stopping. This week, Federal Reserve Chair Powell said he expects inflation to stay high for months.

“By the end of the two years of President Biden’s presidency, families could be losing more than $6,000 in buying power to inflation.

“This was not only predictable, it was predicted.

“We warned anti-energy policies would lead to higher gas prices.

“Democrats have responded with excuses, finger-pointing, and unserious solutions – as you can see on this chart. 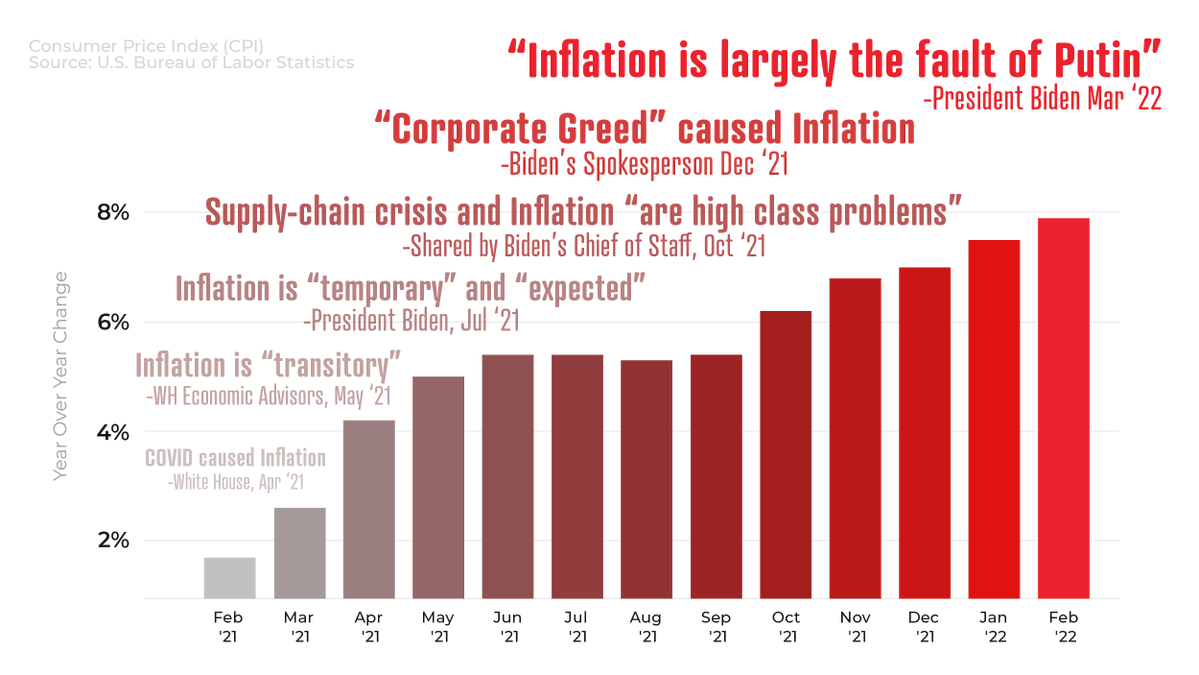 “Then, they said inflation was ‘transitory.’

“Then, it was Putin’s fault.

“And now they are back to blaming the oil companies.

“Americans aren’t buying these excuses, but they are paying for them.

“This incompetence extends beyond failures on the economy.

“Look at the horrific situation on our southern border.

“February was the 12th consecutive month with more than 150,000 encounters.

“Biden’s open border policies have created a crisis that is getting worse by the day: more violence, more suffering, and more deadly drugs.

“Now, as the Biden Administration looks to end Title 42 and other border tools, a ‘potentially gigantic influx’ of illegal migration is expected to overwhelm the border for the second year in a row.

“Democrats have politicized our intelligence committee and made our country less safe.

“Instead of staying ahead of our national threats, Adam Schiff exploited the committee to further his own partisan agenda.

“Two years ago, Schiff stated the emails found from Hunter Biden were all a ‘whole smear on Joe Biden comes from the Kremlin,’ a dishonest attempt to help then candidate-Biden.

“This week the NYT confirmed those emails existed and that Schiff lied to Americans… again.

“When you look at all these failures, it’s clear that Democrats’ disastrous actions are hurting this nation.

“Republicans can and will do better when the American people entrust us with the majority.”