Gas Prices Top $4.00 a Gallon Average in Every State 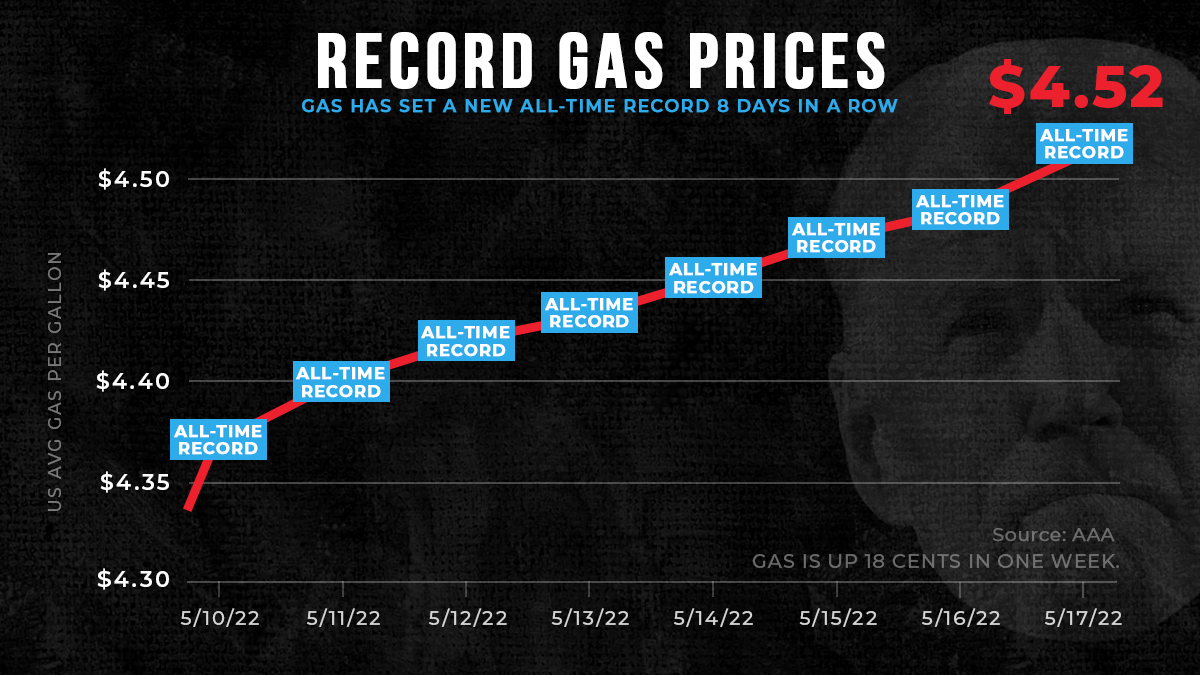 For eight days in a row (and counting), the price of gasoline has hit an all-time record. For the first time ever, every state has average gas prices over $4.00 a gallon. Americans were already predicted to spend an additional $2,000 in gas expenses earlier this year when the national average price was $4.07, now that financial burden will only continue to increase.

This week, Leader McCarthy hosted a roundtable discussion with several House Republicans and small business owners from across the country who detailed the struggles they are facing in this economy, specifically when it comes to the increase of gas prices. One of the participants, Dwight Mashburn, the General Manager of Mashburn Transportation Services, put it best, stating that “… we have the resources here locally to produce [the energy resources] the country needs, and to quit importing it from other countries. We’re not given the green light to do so, even though we’re the best at what we do.”

He’s right. Under one-party rule, Democrats have made attacking our country’s domestic energy producers a top priority. Just last week, President Biden canceled federal oil-lease sales in the Gulf of Mexico and Alaska, taking two of the most resource rich areas in the nation off the table.

To make matters worse, Biden’s Securities and Exchange Commission is in the process of promulgating a rule that would discourage investment in the oil and gas industry and create an uncertain regulatory environment for these producers at a critical time.

We need more American energy, not another attempt at placating his activist base.

In Congress, House Democrats are looking to make the gas price crisis even worse. This week they are planning to bring legislation for a vote that would authorize the Federal Trade Commission to fine oil and gas producers, effectively enacting price caps on gasoline. This misguided move will not only fail to lower the price of gasoline, it could lead to shortages of gasoline across the country.

With an incompetent administration in the White House attempting to squeeze their access to capital and providing no long-term regulatory certainty, the oil and gas industry is simply unable to significantly ramp-up production in the short term.

We know how to solve this problem. Ranking Member of the House Energy and Commerce Committee Rep. Cathy McMorris Rodgers’ (WA-05) and Congressman Bruce Westerman’s (AR-04) bill, the American Energy Independence from Russia Act, would promote domestic production by restarting oil and gas leasing on federal lands and water — which was halted by the Biden administration.