During World War II, the U.S. Merchant Marines were responsible for transporting the Arsenal of Democracy from ports to the combat theaters it was needed in.

With the highest percentage of deaths in the line of duty for any branch of the American military, it was known as a dangerous job.

Today, Leader McCarthy and Congress honored the Mariners’ valor and legacy by presenting the living veterans with a Congressional Gold Medal as a token of the country’s appreciation for their service.

Remarks as prepared are below. For more pictures of the ceremony, visit Leader McCarthy’s instagram.

“I am glad for the opportunity to present the Congressional Gold Medal to the Merchant Mariners, the living and those who have passed on.

“Because World War II was about out-producing the enemy, victory meant supplying our military and allies with tanks, ammunition, planes, and more.

“This job was done largely by the Merchant Mariners and the ships they crewed and commanded.

“It was the biggest, most difficult, and most dangerous transportation job ever undertaken.

“And we know how the Merchant Marine responded: everything America asked of them, they delivered.

“We saw it with the Murmansk Run in Russia.

“And we saw it with SS Stephen Hopkins and Merchant Marine Academy Cadet Edwin O’Hara – who valiantly fought back against German raiders in the South Atlantic, despite being outgunned.

“If there’s any doubt that the Merchant Marine served this nation courageously, look no further than their casualty rate.

“One in 26 civilian mariners gave their lives in the line of duty – the highest percentage of any branch of the armed forces during World War II.

“Yet they returned voluntarily to their job again and again because they knew our service members depended on them.

“The Merchant Mariners deserve our gratitude and respect, and their service and legacy is deserving of this award.

“As others have said, this award is long overdue. For 76 years, our courageous merchant mariners were denied full recognition as veterans. Today, we are correcting that slight.

“I want to thank the Mariners joining us today, including Dave Yoho, for their patriotism and their leadership on this issue.

“We are grateful for your service to our nation. And we will always remember the sacrifices of the Merchant Marine.” 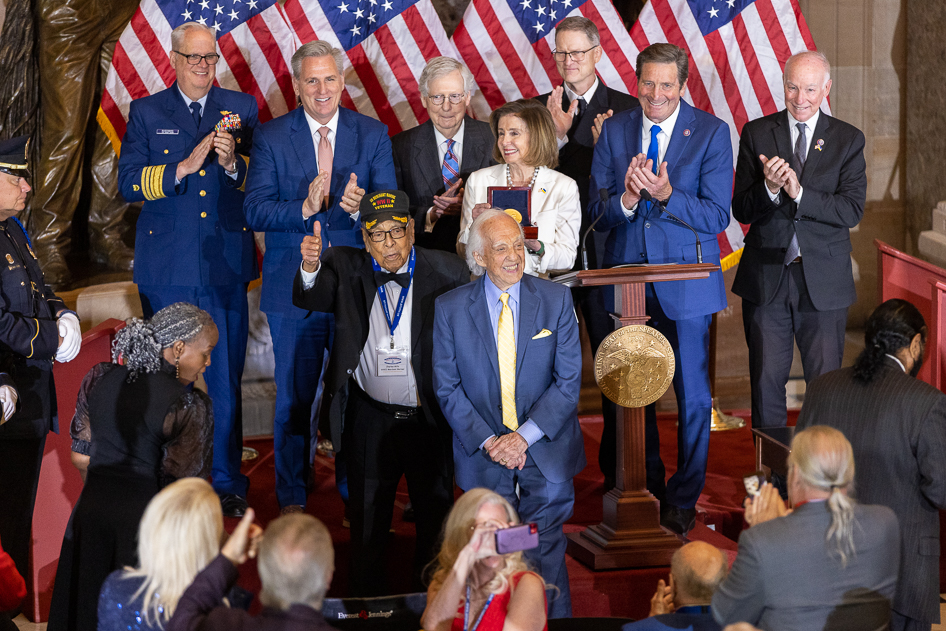