McCarthy to Pelosi: Let Us Lead By Example

Washington, D.C. – Today, House Republican Leader Kevin McCarthy (CA-23) and GOP Conference leaders sent a letter to Speaker Nancy Pelosi expressing strong opposition to her unilateral decision to extend the 45-day “covered period” that was designated on May 20, 2020 pursuant to House Resolution 965. “Our work on behalf of the American people is the definition of essential work—now more than ever,” Leader McCarthy, Whip Scalise, Conference Chair Cheney, and Ranking Members Cole and Davis write. “We have demonstrated that in-person voting—and the accountability that comes with it—can be done in the House of Representatives in a safe and responsible manner.”

Read the full letter below, or read it online here.

As we approach the end of the 45-day “covered period” that was designated on May 20, 2020 pursuant to House Resolution 965, we strongly oppose your unilateral decision to renew this period.

The covered period allows members to vote by proxy on the House Floor—an unprecedented practice that flies in the face of over 200 years of bedrock institutional norms and which has only been utilized by members of the majority.

We believe proxy voting is patently unconstitutional—a concern even acknowledged in the Rules Committee report prepared by Chairman McGovern at your request. This is one of the many reasons we unanimously opposed House Resolution 965 last month and why the constitutionality behind proxy voting is presently being argued in court.

The covered period also permits committee business to be conducted remotely. In recent weeks, this hastily designed system has proven to be ineffective at best and an abject failure at worst. Technology issues have repeatedly marred committee activity and chairs have been forced to recess hearings and markups due to said technical difficulties. As we work through Congress’ growing backlog of business, it is imperative that critical committee proceedings not be further delayed or hampered due to what one Democrat brushed off as “bandwidth issues.”

While we continue to monitor and address regional outbreaks, your determination to renew the covered period fails to take into account the many encouraging developments we have seen this past month. Specifically, since the partisan approval of House Resolution 965:

From day one of this pandemic, our frontline workers have shown up to the job and kept this country going. Now with over 2.5 million jobs created last month, we are increasingly seeing more of our friends and neighbors returning to their places of work.

Nevertheless, during the inaugural covered proxy voting period, 70 Democratic members failed to show up for votes in the House—resulting in over 50 million Americans losing the voice they entrusted to their duly-elected Representatives.

Although your regulations clearly stipulate that proxy voting can only be used by members who are “physically unable” to be in the Capitol due to the coronavirus, one member of the Democratic caucus cast multiple votes by proxy in order to attend a space launch that took place several hours outside his district. Another member used voting by proxy just hours after voting in-person because he “wanted to get home for some family obligations.”

While it is understandable that certain members may rightfully elect to miss votes during this time for personal-health reasons, these deliberate violations of your rules are wholly unacceptable. Far from being “the captains of this ship,” as you initially proclaimed, these sad instances show how your covered period has instead been used as an excuse to abandon ship.

Our work on behalf of the American people is the definition of essential work—now more than ever. We have demonstrated that in-person voting—and the accountability that comes with it—can be done in the House of Representatives in a safe and responsible manner. The United States Senate has proven it can be done for months now. And we believe you know that our Congress—a literal coming together of people and ideas—works best when it happens in-person, face-to-face.

Fittingly, there is no better day on which to end this flawed and unconstitutional experiment than America’s Independence Day. Our nation’s founding was made possible by ordinary citizens persevering against the longest of odds. The United States Congress is no exception. The People’s House has resolutely convened through peace and war, pandemics and physical attacks—on both the Capitol and its members.

As Americans everywhere pause to recognize and celebrate Independence Day, it is our hope that the 116th Congress will uphold this time-honored tradition and exhibit the very best of the American spirit by rising to meet the challenge before us.

Simply put: we must lead by example and show up to do our jobs for the American people. Our constituents expect and deserve nothing less.

Thank you for your sincere attention to this matter. We stand ready to do whatever it takes as we strive to heal and strengthen our nation. 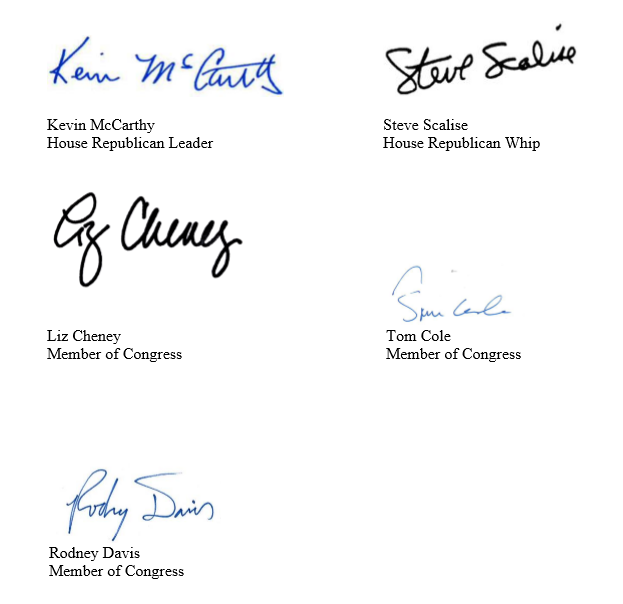