The Leader’s Roundtable: Making the Case for Domestic Energy Production

Inflation hit a new 40-year high at 9.1%. The average price of gasoline nationwide is $4.61. In gasoline costs alone, Americans are estimated to be paying an additional $5,000 more a year than last year.

The commonsense solution to curb rising fuel costs should be to increase American domestic energy production. Instead, the Biden administration and Congressional Democrats are curtailing our production of our energy resources. In their latest move of backwards policies, the Department of the Interior’s draft 5-year oil and gas lease sale plan opens up the possibility of there being no sales at all.

And while his administration continues its assault on American energy production, President Biden is flying across the globe to beg Saudi Arabia for increased oil production. His policies are putting America last.

They all agreed: It’s critical that President Biden takes every action he can to increase domestic oil and gas production and increase our country’s long-term energy production capabilities. That means reducing regulatory barriers and ending his administration’s war on domestic energy production.

Here are the takeaways from their discussion:

Leader McCarthy: “From his first day in office, President Biden started attacking this industry. The sad thing is: this is American jobs, American security, and American families who will be spending $5,000 more this year.”

Whip Scalise: “I know some of my colleagues from other states that produce energy, whether it be Texas, Oklahoma, or New Mexico, we have the ability to produce our own energy. We ought to be doing it here, not going to foreign dictators to get it there.”

Ranking Member Graves: “One in four Americans have been unable to meet their own basic needs because of high gasoline costs… what’s the worst thing about this, as Leader McCarthy said, is that these are unforced errors. These are self-imposed crises.”

Ranking Member Westerman: “A strong economy and a clean environment, a healthy, safer, cleaner environment are not mutually exclusive. They actually go hand-in-hand… this administration and their far-left, their attitude is ‘no we can’t and no you can’t.'”

Ranking Member McMorris Rodgers: “Republicans are anxious to unleash American energy…it’s unfortunate to see the Biden administration and the majority in the House — led by Speaker Pelosi — say no, they are shutting down American energy and American energy producers.”

Rep. Pfluger: “There is no reason why we would be hamstringing ourselves on the most basic and foundational piece of security – which is energy.”

Rep. Bice: “Democrats want to blame everyone else for the [energy price] increases… they never want to take responsibility for the actions that they’ve put forward. I think the American people know better, they see what’s happening at the pump everyday and at the grocery store everyday.”

Rep. Herrell: “The [Biden] administration will say that there’s 9,000 unused permits, but really what they’re not telling the American people is that there’s lots of other steps that go into the permitting process… some of our producers are waiting 400 days for a [federal] permit, they can get one from the state in 7 days.”

Mike Gooding, President of San Joaquin Facilities Management: “In California, we produce 375,000 barrels of oil a state. We used to be able to produce 1.8 million barrels a day… [agencies in the state of California] won’t approve our underground injection permits because they know they control our injections they can control our production.”

Tom Jorden, President and CEO of Coterra: “We have tremendous obstacles in front of us. You’ve mentioned federal permits and we need infrastructure… it’s amazing to me that the President is calling on the E&P producer to increase production in the United States after killing the Keystone XL pipeline.”

Jeff Wilson, Vice President of Public and Government Affairs of Devon Energy: “This isn’t a question of resources, we have the resources to help supply the world… we can serve the American public and the world with the energy we have here, but it requires commitment and regular order when it comes to permitting.”

Joe Leimkuhler, COO of Beacon Offshore Energy: “When the [International Energy Agency] laid out their outlook from 2022-2050, I was shocked. I expected to see the nation’s reliance on hydrocarbons decrease, but it actually increased… that level of activity and investment is not there to replace our natural production.”

Steve Pruett, President and CEO of Elevation Resources: “Regulatory uncertainty is crushing us. The EPA announced they’re going to likely impose an ozone non attainment status for the Permian Basin, which is a great tool for the EPA to slow down permits.” 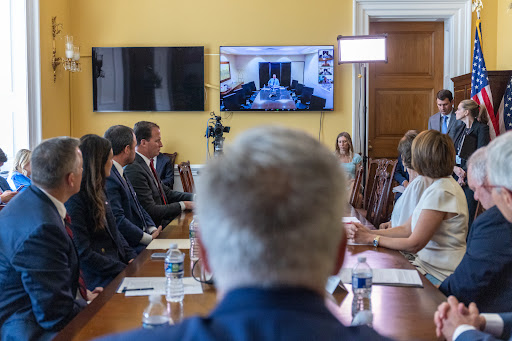